This is a comment to an article about the role of Zionism in the Norway massacre.

Name any nation that is not at war…  you can’t.  Nearly every country in this world is in some sort of conflict.  No matter what religion the majority of their citizens claim.  Read the news:  Buddhist Thailand vs. Buddhist Cambodia, over a temple.  Civil wars and rebels all over the Christian nations of Africa.  The secular and Christian nations of the West occupying, attacking or aiding conflict all over the world.  Zionist Jews in Palestine.  Hindus committing atrocities in Kashmir and against Muslims and Christians in India.  It’s everywhere.  EVERY religion has members that are fighting, that kill innocent people, that commit murder and rape, that embezzle, scandal, scam, scheme and plot, rob, plunder and steal, commit adultery, abandon children, can’t read or write, molest children, bribe their way out of justice, etc., etc., etc….  And secularists, atheists, agnostics, and humanists get in on it too, so don’t blame religion

Let us look at an example.  It is true that many Christians were at the forefront of abolishing slavery worldwide (many were also the leaders of enslavement).  Should we judge Christianity by that?  According to some places in the Old Testament and Romans 13.1, opposing the laws that allowed slavery were AGAINST what they consider to be the word of God.  In other words, they had to step OUTSIDE Christianity to free slaves.

Islam’s Qur-an and Hadeeth (Prophetic narration) literature support abolition and forbid enslavement outside of the context of war-captives when there is no exchange for prisoners.  So while many Muslims were involved in the slave trade, they were stepping OUTSIDE of Islam to keep slaves.

Judge them by the book.

The United States Constitution and Declaration of Independence, celebrated symbols of freedom, enslave Africans, dispossess Native Americans, deny the rights of non-landowning white males, and deny the rights of all women.  So freedom, justice and equality can only be achieved by stepping OUTSIDE of America’s founding principles.

This is why we Muslims argue from our book.  That, not the action of the next Muslim you walk past, is Islam for us.  We only know the Qur-an as Islam.  We don’t know what every Muslim in the world is doing and why, but we will argue as strongly against a (seemingly) good deed as we will against a bad one if it is inconsistent with our law and doctrine.

The truth is that Muslims also do a lot of good things, for the sake of Allah, in the name of Islam, to get a reward in heaven, etc.  Find them and what they do.  See, do they outnumber the wrongdoers?  I leave that as an open question to any sincere seeker of accurate information, I won’t answer it for you.

Personally- and this is admittedly subjective- I’ve been around the world and read and heard viewpoints from many walks of life.  I was in NYC on 11 September 2001 and accepted Islam there 3 years later.  Islam is my free choice because after research and experimentation, I found it to be the best and most complete way of life.  I won’t lecture you that I’m right, but I assure you that I’m aware and sincere.  See for yourself:  https://qahiri.wordpress.com/2011/01/05/11/

So please, do justice to yourself and stop ignoring all the wrongdoing and conflicts involving non-Muslims, and all the good done by Muslims, to prop up an argument that is an offense to intelligence, reason, history and logic.   Islam is singular in its establishment of justice and right.  Why do some Muslims act to the contrary?

For more on the accusations of rape, sexism/masochism and slavery in Islam:  https://qahiri.wordpress.com/category/stockholm-syndrome/

To see the deceptive and erroneous nature of Islamophobia and WikiIslam exposed:  https://qahiri.wordpress.com/2011/01/06/dealing-with-doubt/

To see whether Islam is incompatible with democracy:  https://qahiri.wordpress.com/2011/01/10/is-democracy-islamist/

To see if there is any difference between Arab culture and Islam:   https://qahiri.wordpress.com/2011/01/05/is-islam-arabian-part-i/

I recently read a well–sourced article about a group seeking to wage “spiritual warfare” to gain world domination that has a lot of influence on American politics.  The beliefs and activities of this group are all the more shocking to me because I grew up being taught them.

This is my testimony:

I grew up in a church who taught its members to ‘wage spiritual warfare’, such as ‘loosing angels’ or ‘casting hedges of protection.’  We were even promised that we would rule, as gods, like God, over our own realms in heaven.  Nowhere, not even in the Bible, does Allah a/k/a God command these activities, grant the powers to conduct them, or promise such powers.  The angels are only under his command.  It is only he who can protect, though our requests for it may be a factor in His doing so. 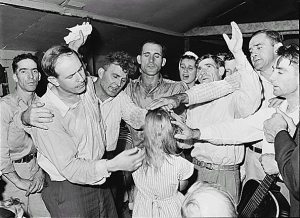 So where does this idea, these supposed powers, come from?  Not from the known revealed books (the scrolls of Abraham, the Taurah of Moses, the Psalms of David, or the Gospel of Jesus), the little of them that is preserved in the Bible, or what has been added to them.  The fixation on Satan- even as an adversary- is both telling and ironic:  they deviate from revelation and/or scripture because of him, so it is him that they truly follow.

This is not an accusation.  It’s not a manipulation of logic.  It’s scriptural.

Turn to Genesis 3.5.  There, the serpent promises Eve is that “ye shall be as gods.”  The Qur-an confirms this event in several places:  7.20, 20.120.  That is not Allah’s promise, it is Satan’s promise.  It is his promise that they are walking in.  Even if some mystical powers are mentioned elsewhere in the Bible, it is not claimed that a prophet under revelation from Allah, is saying that the people will have them.  Even if such a claim is made, there is no way to prove it to people who don’t already believe it.  So that leaves us with only one available conclusion.

The belief in having divine powers is a belief based on a promise from Satan.  In Arabic, and most likely it’s fellow Semitic colleagues Hebrew and Aramaic, the word for Satan means “perverter”.  Here, in my church and the larger NAR movement, divine powers and roles are being claimed by humans.

Many people, of course, do not follow a religion or scripture.  Nonetheless, it is clear that claims to have (and intent to somehow exercise) magical-esoteric-spiritual powers and the quest for world domination are problematic in any setting, particularly politics.

The use of biblical rhetorical in both the case of the church I grew up in and the NAR is a disguise.   The Bible and certainly not the books revealed to Abraham, Moses, David, and Jesus are not to blame.  In fact, the same thing has been done to many scriptures.  Read Paramahamsa Yogananda’s autobiography.  In it, scripture is discarded in man’s quest to achieve divinity, and he claims that his guru attained it upon his death and explained it to him in a vision.  There are mystical-esoteric-cryptic movements riding the back of every revealed religion that all have striking similarities and parallels.  I picked up on this at the least religious point in my life and even made a presentation about it in a comparative religions class.  The similarities of these many means that they are in fact one, approaching the same goal of godhood and dominion from many paths.   E pluribus unum.  Write this off as “conspiracy theory” if you want to, but not before you read the research.

“Except Thy servants among them, sincere and purified

(Allah) said: “This (way of My sincere servants) is indeed a way that leads straight to Me.

Surely. as regards My servants, you have no authority ,over them except those among the deviators who follow you.

Behold! We said to the angels: “Bow down unto Adam”: They bowed down except Iblis: He said, “Shall I bow down to one whom You Created from clay?”

He said: “Do you see this (creature) who You Have Honored above me?! If You Give me time until the Day of Judgment, I will surely bring his descendants under my influence – all but a few!”

(Qur-an 17.61-2)
YUSUFALI: When they do aught that is shameful, they say: “We found our fathers doing so”; and “Allah commanded us thus”: Say: “Nay, Allah never commands what is shameful: do ye say of Allah what ye know not?”